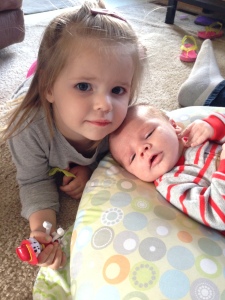 I arrived back in Norfolk on Friday, May 9th, after a great visit back home with friends, kids, Mom, siblings, and best of all, grand children. My time there was busy and full, and it was good to re-connect face-to-face with those so dear to me, and to meet Logan, the new addition!

Jim greeted me at the airport, having rented a car to go to the Great Looper’s Rendezvous during my absence. It was good to see him, and I was struck by how green everything looked in comparison to home with the late Spring there. 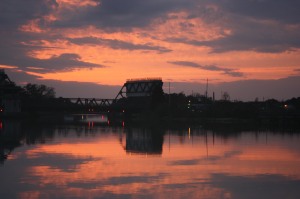 Saturday we spent re-provisioning, and planned our first few days in the Chesapeake. We walked to the ‘Farm Fresh’ grocery store nearby, toting our carts. We also purchased an extension cord for the iPad, which has proven invaluable as an additional aid to navigation while up on the fly-bridge. Jim showed me all the improvements done to the boat. He fixed the helm seat, which was rickety and squeaky and even fell off a few times! We enjoyed watching the big boats waiting for the Great Bridge bridge openings, and I met a few of the neighbors and toured one of their boats.

A couple of the many Norfolk Bridges

Mother’s Day dawned bright and sunny with light winds. After breakfast and dishes, we moved the boat up the dock to the fuel area, where we pumped out and fueled up. We shoved off, then waited a few minutes for the 10:00 bridge opening. Just beyond the bridge is the Great Bridge lock with a short drop of a couple of feet. Beyond that the Steel Bridge, where we waited again for the hourly opening.

We cruised past many commercial and military ships, and the downtown area of Norfolk, and I saw where the Rendezvous had taken place. After several more bridges and a wait for a ship leaving port, we made our way into the great Chesapeake Bay. We cruised about 50 miles that day in sunshine and sparkling calm seas to Yorktown, which is up the York River about 6 miles. Here we got a mooring ball from the Riverwalk Marina. We played backgammon, and talked, texted, or Face-timed with the kids. It had been a blissful day, perfect boating weather with beautiful vistas, and no engine or fuel problems! 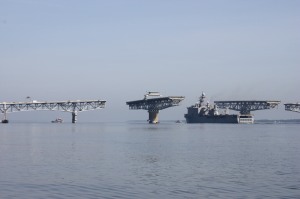 Huge waves rolled through from somewhere Monday morning, and I flew out of bed. That got me going! We watched a military ship pass through the 60 ft. high Coleman Memorial Bridge, the only double swing-bridge in the US, and make its way to the munitions depot beyond. We took the dinghy to the marina office to settle up for the use of the mooring ball. From there we explored the Riverwalk on foot, then hopped a free trolley to the Yorktown Victory Center.

Yorktown is significant in our nation’s history, as it was where the last battle of the Revolutionary War took place, and where the British commander Cornwallis surrendered to George Washington. The Victory Center was a large museum with an amazing collection from that time, and had a living-history army encampment and 1780’s farm.

From there we rode the trolley to the Victory Monument, which was at the site of the battle. The 13 women around the mid-section of the monument represent the 13 US colonies. The grounds provided a picturesque view of the York River, from which we could see our boat. 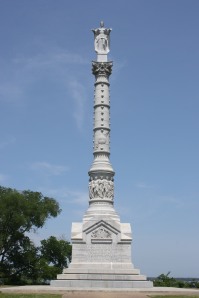 It was a long and hot walk back to the Riverwalk area of town where we stopped at Ben & Jerry’s for ice cream and a bag of ice. Back at the boat we donned our swimsuits, turned on the air conditioning, dangled our feet in the 63 degree water, and watched the dolphins.

On Tuesday the 13th, after having trouble keeping the generator running, we headed back down the York toward the Chesapeake, again encountering ships and many Coast Guard boats. The engine quit once, but with our new double Racor system, Jim was able to quickly switch tanks, and we were soon underway again. It was another beautiful sunny and hot day. We navigated into Jackson Creek, and pulled into the Deltaville Marina and Boat Yard.

After discussing our continued problems with the Boat Yard staff, we scheduled work to be done early the following morning. We took loaner bicycles into town, and made a stop at West Marine for a new shore power cord and more filters. We met some of the other boaters, and turned in early.

At 7:30 Wed morning the mechanic was at our boat. They believed our issue was a matter of a plugged screen on the port fuel intake line. To access the line, a 6″ diameter hole had to be cut through the parquet wood floor, which took some doing. While the work was being done I did a couple of loads of laundry. They had diagnosed the issue correctly, and by noon we were underway again.

We did a short stint that day, about 25 miles because of the delayed start. The engine ran great, although the Racor filters picked up water, so they had to be drained. We anchored out near Sandy Point in the Great Wicomico River off Ingram Bay. I loved the anchorage spot as it was very secluded and protected. We played backgammon on the upper deck during happy hour. That evening the fog rolled in, and frogs could be heard croaking in the distance.

Surprisingly there was no fog in the morning, only low clouds and 10 mph winds. We made our way back down the Wicomico, through Ingram Bay to the Chesapeake. We encountered many crab pots along the way. Ships could be seen nearby in the shipping channel, and we had following seas, which picked up gradually as we headed north. One area on the navigation chart showed directional traffic lanes. Occasionally there are large round markers appearing in the distance like lighthouses or the pilot house on a ship.

We had difficulty maneuvering to the narrow inlet on our way to Smith’s Point Marina. We chose it for the protection it offered, as the weather was forecasted to turn nasty, with rain and gale warnings on the Chesapeake.

The marina is very remote and a little on the rustic side. The employees were very helpful with docking and pump-out upon our arrival. All Racor filters were loaded with water upon our arrival, so Jim drained them, and arranged to have the fuel polished once again. Back at the Atlantic Yacht Basin, after polishing, the mechanic left the cap off the fuel tank. Jim arrived after dark in the pouring rain and hail, not noticing the cap was off. In the morning after his discovery, they re-polished the fuel to get the water out, but obviously they didn’t get it all. 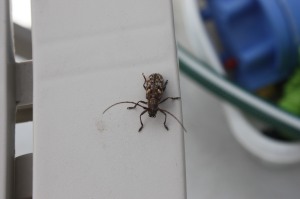 The fuel polisher is here now, and he is finding loads of water and black gunk in the fuel. Will this issue never end? I am tired of not trusting the boat, and Jim is tired of moving furniture, lifting the heavy engine covers off, and lying on his belly with his arms deep into the abyss below. From overuse, he now has water on one knee, and is disgusted that we keep having fuel issues. And we’re both getting tired of the smell of diesel.

One nice thing, after heavy rains this morning the sun just broke out again. The winds have shifted from a southerly direction to a northerly, making it cooler. It will also mean we will be driving into the waves, which makes life easier when underway.

Once through the Chesapeake we go thru the C&D Canal, then through the Delaware Bay. Our travels will take us through mainly very big water until we clear NYC and are several miles up the Hudson River. It is a little intimidating, and requires certain weather windows, so progress seems a little slow. At the Rendezvous Jim was told that more people climb Mt. Everest every year than travel the Great Loop route. It is a much more grueling endeavor than we ever dreamed, but am glad we are committed to finish the journey.

Tonight I’m going to cook a good chicken dinner. We plan on leaving tomorrow morning to head up the Chesapeake to Solomon Island. It sounds like a fun community, with a nearby grocery store and lots to do. I’m looking forward to a little civilization after the remote areas we’ve been in for the last few days. Our phones don’t work here, but one good thing we have great internet service. Perfect chance to work on the blog!

This entry was posted in Uncategorized. Bookmark the permalink.